Healthy Reasons Why It’s Good To Be A Father 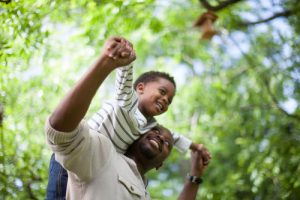 When men think of fatherhood, they may think of sleepless nights with a crying baby and stress over being a good provider. While either one of the things they think about before fatherhood may be a reality, most men do not realize there are health and wellness benefits to being a father. There are real reasons why it is good to be a father. We’ll take a look at the top 5 so you see why being a dad would look good on you!

The dad bod is actually a fashion statement, if you can believe that. And while mom may gain a few extra pounds with the new baby, Dads don’t have to go along for the ride. Dads do not always gain weight when the baby comes. It’s also true that the things a father to be may worry about before the baby comes don’t seem as big of a deal as when the baby arrives. Perhaps those men have found that the reasons it’s good for you to be a father are a reality.

Five Reasons It’s Good For You To Be A Father

I’m sure you probably haven’t heard that there are health benefits to being a dad. Studies have shown that it’s good to be a father for many reasons, but these are the best ones for new dads overall.

Fathers Eat Better Than Single Guys – While single men tend to eat convenient and processed food, dads eat more home cooked meals and pay better attention to nutrition than their childless counterparts. Maybe it’s because it is cheaper to eat at home. It could also be that dad is paying more attention to health for the sake of his children. No matter what the reason, it’s good for you to be a father in making better dietary decisions.

Dads Are More Active Than Non-Dads – Chasing around a baby is definitely going to get you off the couch more. Taking your children out for a walk or to the park also gets those steps in to make dad a healthier guy. Kids are much more active than adults and it’s good for everyone’s mental health to get outside for a bit. It’s good to be a father because there’s no time to be a couch potato with kids around.

Fathers Report Better Mental Wellness – There are a couple reasons dads feel better about themselves and the world around them than men who do not have children. The plain and simple truth is children give you something to live for. Fathers report better feelings of wellbeing because having a purpose gives men a much needed boost in self-esteem, in general. The second reason fathers feel better about themselves is the love their children give to them in return for all the hard work they put into being a dad. Dads get paid in hugs and kisses, and if you ask a dad, that’s all they really need to feel great about being a father.

Being A Father Helps You Connect With Others – Being a father isn’t just good for your wellbeing, it’s also good for the other people in your life as well. Being a dad helps men focus on others more than men who do not have children. They say it is better to give than receive and children are good at teaching us how to be other-focused. This not only improves relations in the home but with friends and coworkers as well. Kids make us better people.

Depression And Suicide Risk Linked To Single Men Without Children – Being a bachelor without kids might feel like freedom when you are young, but Harvard Medical School studies show a higher risk for clinical depression and suicide single men without children. It’s good to be a father because it’s better for your mental health than being alone.

If you are worried about being a dad, you should know you are not alone. Almost every dad will tell you the news about becoming a dad was terrifying. Men have many questions about what it will be like to be a father or if they are up for the task.

The good news about worrying is reality tends to look much better than what you dream up in your mind. It’s good to be a father, as many fathers will tell you.

If you want to talk to a dad who has been there, the conversation is a phone call away. Make an appointment today to talk to one of our dad mentors.