Why Unplanned Pregnancy Is Not A Simple Physical Issue 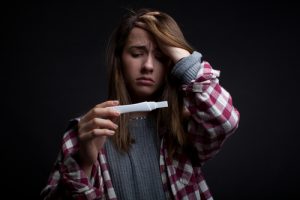 When a woman discovers that she might be pregnant when she doesn’t want to be, several things happen at the same time. The process of grief typically starts. That might sound weird to those who are not coming alongside these women every day. When you are facing an unplanned pregnancy, that news comes as an interruption to whatever the mother was planning to do with her life up until that day. That is why the process of grief starts. To her, this could be the end of her college life, relationship, career choice, living situation, or any number of things that could hinge on whether or not she is pregnant. An unplanned pregnancy seems to threaten a lot of things. This is why we can’t look at it so simplistically as a physical issue that needs to be weighed out. The stakes are much too high for that.

The problem is, most would see it as a simple physical issue that needs to be solved. Does she remedy the physical issue that threatens to steal her future, or does she accept her issue as a welcome change in her plans? The issue is not helping her see her physical issue more clearly. That is the mistake that most pro-lifers make. It is in getting her to slow down to see that the issue she is wrestling with is a complex emotional one that needs to be handled entirely differently than she likely thinks.

Unplanned Pregnancy Is Not The War You Think It Is

Too many conversations with women facing an unplanned pregnancy end because the focus is on the wrong war. Focusing on the wrong war means the incorrect weapons are employed. The result too often is lost on all sides.

I hate to break it to you, but women facing an unplanned pregnancy are well aware they are carrying a baby. They know this. Intellectually they get it. Where they get lost is in the denial that turns to anger over her situation. This is the second stage of grief. She will find anyone to be mad at over her situation. Sometimes it is the biological father, occasionally it is herself, and other times, her anger turns toward the child she is carrying. If she can be angry at this little life, then she won’t have to care that his or her life could be ending. Lack of empathy creates situations where decisions are made in haste. We must focus on the real issue at hand.

Helping Woman With The Grief Process In Unplanned Pregnancy

Once the mother has worked through the anger stage of unplanned pregnancy, then comes the bargaining stage. This is where the pros and cons of decisions are made. The pro-abortion movement likes this stage too. This is where she can be manipulated into thinking that trading the life of her unborn child for her plans is a good thing. At this stage, what she is bargaining with is a life. Whose life is more important in this stage? It depends on who she is talking to about it.

In the pro-life space, the conversation turns from making bargains over who is going or staying in this situation into how both can co-exist. Her future is not over. It is just going to include a companion along for the ride. Once she understands what is possible, decisions are made clearly. At this stage, she can gain confidence in her new assignment as a mother instead of being a victim of circumstances beyond her control.

Depression is the next stage of the grief process. This happens a lot, no matter what she chooses. Even if she chooses life for her child, that doesn’t mean that everyone else involved will be as excited about her decision. Helping her walk through her choice is where the real work begins. She will need support to deal with unsupportive family members. Ending the depression is another way that abortion clinics win. They offer to end her pain. What she doesn’t know is that their solution is only the beginning. Wading through the emotions is difficult, but they pass. Being a support is critical to her well-being and her ability to carry her baby to term.

Once all this is processed, the last stage, acceptance, comes. This is the stage that abortion clinics never see. This is where the hope shines through for mom and the people helping her chose life.

Help Women With The Emotions That Go Along Unplanned Pregnancy

Now that you know that you are not dealing with a mere physical issue with an unplanned pregnancy, you see, there is more involved in helping her choose life. Committing to help women choose life costs a lot more than that. Women’s centers like ABC Women’s Centers depend on donor contributions to help women with the complex emotional issues that go with an unplanned pregnancy. Would you be willing to commit your hard-earned dollars to help us help her? Contact us today for ways you can make a financial commitment to ABC Women’s Center today.